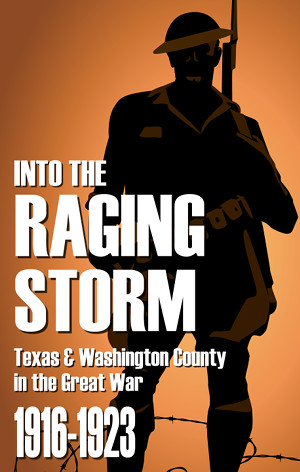 This exhibition is the culmination of a five-year project, to coincide with the 100th Anniversary of the First World War. This exhibition will be on view at The Chappell Hill Historical Society Museum, 9220 Poplar Street, Chappell Hill, TX 77426, through November 11, 2019.

Texans entered service for the Great War in 1917, and continued to serve in the war through the post-war events in Russia in 1919.

The exhibition will tell the story of some individuals, but will also explain the conditions of service at every step of involvement. Steps include enlistment, travel, training, deployment, subsistence, and combat. Of particular significance to the communities of Washington County is the effect upon German-American immigrant communities by an existing state of war with the German Empire.

The approach of the exhibition is a subaltern one, focusing heavily upon the experiences of the individual soldier and citizen, instead of upon battles, leaders, or reasons for war.

This exhibition is presented in partnership with the following organizations: